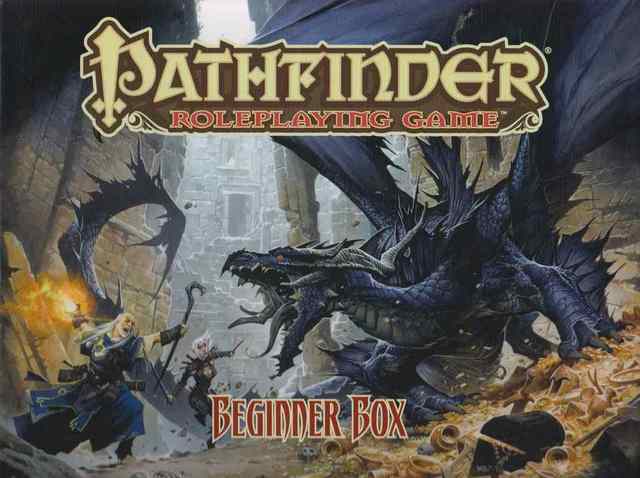 Take your first step into an exciting world of fantasy adventure with the Pathfinder Roleplaying Game Beginner Box! Within you’ll find simple rules to create and customize your own hero, as well as a robust system to run your character through challenging adventures and deadly battles against villainous monsters like goblins and dragons!

Will you be a courageous fighter who masters weapons and armor to cut a trail of destruction through your enemies? A wise cleric who calls upon the power of the gods to heal your allies and burn enemies with sacred fire? A witty rogue able to disarm traps and strike with deadly accuracy? A brilliant wizard whose magical powers bring foes to their knees? All the details of your character are yours to control. The only limit is your imagination!

The Pathfinder RPG Beginner Box includes:
* 64-page Hero’s Handbook, detailing character creation, spells, equipment, and general rules for playing the game
* 96-page Game Master’s Guide packed with adventures, monsters, magical treasures, and advice on how to narrate the game and control the challenges faced by the heroes
* A complete set of 7 high-impact polyhedral dice
* More than 80 full-color pawns depicting tons of heroes, monsters, and even a fearsome black dragon
* Four pregenerated character sheets to throw you right into the action
* Four blank character sheets to record the statistics and deeds of your custom-made hero
* A durable, reusable, double-sided Flip-Mat play surface that works with any kind of marker

This exciting boxed set contains everything a new gamer needs to get started with the Pathfinder Roleplaying Game, the smash hit RPG system that has taken tabletop gaming by storm. From dice to game pawns to simply stated rules, this box is the ideal entry point to the world of Pathfinder.